The Biggest US Consumer Trends for 2023

If you’re looking for answers about the future of America, you’re in the right place.

This year we’re introducing five US trends that we’re convinced will shape the lives of American consumers in 2023.

Each topic has data from our unique data sets, including our American-specific study GWI USA, and our monthly Zeitgeist research. Our team of expert analysts has identified exactly what you need to know, transforming our data into trends that will put any company ten steps ahead in this fast-changing nation.

See each trend in full as part of our Connecting the dots report, and keep reading on for a rundown of what brands should expect next year.

Americans are striving for simplicity

Americans’ future economic outlook isn’t good. 51% of US consumers believe that the US economy will get worse in the next six months and confidence in personal finance looks to be decreasing too. Consumers have become more price-conscious about everyday expenses and, since Q2 2021, the use of apps to track spending has increased 9%. Budgeting is back on the menu.

This has manifested itself in a number of ways, but one, in particular, is how we’re seeing Americans make big changes to their working life. Time away from a traditional 9 to 5 has allowed workers to explore other options, with the number who work while on the road or traveling increasing by 38% since Q3 2021.

The search for the simple life is as much a cultural trend as it is an economic one. Some start the #vanlife because they have to, others because they want to.

Alongside this, while consumers still value a workplace where they can challenge themselves and progress, salary, benefits, and time off still take precedence. Boundaries are being set, and career goals have been redefined to fit the “I work to live, not live to work” narrative. And with good reason, as US workers face some of the highest levels of burnout and being overworked.

Americans are also much more modest about themselves.

They see themselves as less sophisticated, less trend-focused, and less bothered about showing off.

This is key for brands to understand in 2023 – especially in luxury and premium sectors. When times are hard, status symbols change. Sometimes simplicity is the biggest luxury, and people will pay good money for it.

Since Q2 2021, there’s been an 8% drop in the number who want brands to be “exclusive”, which means that high-end brands won’t be able to rely on their logo as much as they used to.

The number of Gen Z who say that following influencers is a top reason for using social media has dropped 22% since Q2 2021, while Americans of all ages are less likely to agree that social media is good for society. Yet interest in influencers is still there and growing, increasing by 16% year-on-year, and will probably continue to grow as long as the content shared shifts from aspirational to inspirational.

The media is becoming a more important outlet for emotion

Many Americans are left dealing with the aftermath of Covid, and now the cost of living is quickly taking its toll. It’s no wonder more people are focused on finding catharsis – a way of releasing or managing the frustration they’re facing – in 2023.

For many, this is coming through the media they consume. And with our research into trending genres, we can forecast what sort of media will resonate most with viewers and listeners in the year ahead.

Much of the situation Americans find themselves in is out of their control, but they can choose what they watch or listen to.

Over half of Americans say they listen to audio – whether that’s music, podcasts, or audiobooks – to help them relax, and over 1 in 3 say it helps release stress and anxiety. With mental health increasing in importance, consumers are turning to media to help them through the day.

On the small screen, viewers have been steadily losing interest in the news. Americans are trying to avoid current affairs, and any anxiety it may bring on – a feeling they know all too well.

20% of Americans say they’ve experienced anxiety regularly or often, up 32% from two years ago.

The percentage who feel anxious while watching content? Only 3%.

However, nearly half indicate that they watch content as an escape/diversion. Americans are watching TV/movies to distract themselves from what’s going on away from the screen.

Fatigue is replacing the fighting spirit

As the emotional labor of the last two years has taken a toll, interest in equality, social issues, and volunteering is in decline.

Our data from Q2 2020 reflects the mood of the nation during the height of the Black Lives Matter protests – being socially responsible was the number one brand priority for Americans. Two years later, this has shifted to rank third in Q2 2022. In fact, it’s the fastest-falling brand initiative since 2020.

This shift is mainly due to decreasing sentiment from older white consumers. We’ve seen an 8% decrease in those agreeing brands should be socially responsible among white consumers, followed by baby boomers (-9%) and Gen X (-11%).

But for Asian Americans and Pacific Islanders (AAPI) and Black/African Americans, this priority has remained unchanged. For People of Color (POC) in America, it’s just as important as it was two years ago.

Even though being socially responsible has dropped in consumer priority, this doesn’t mean brands are devoid of responsibility. Supporting diversity and equality in the workplace is the fastest-rising brand initiative.

Predominantly led by younger generations, we’ve seen increases across all racial and ethnic demographics, and it’s an example of an area where brands can begin to enact real change. Strong messages of support can be a good start, but walking the walk is the more pressing issue according to consumers.

Brands need to think long-term. Results and successes take time to build and cut through the noise. Less talk, more action. It’s an obvious statement, but one that continues to be top of mind for consumers. Whenever social justice has been on the agenda in the past few years, consumer sentiment toward brands has been consistent.

They want action, impact, and results – not meaningless PR pushes.

Putting out statements for self-serving reasons, or because everyone else is, can be actively harmful – 46% of US consumers are tired of hearing about social justice causes all the time.

Alongside a decline in social issues, our research suggests that in 2023 while most Americans view climate change as a real threat, they want to stop hearing about it. They will still expect brands to take action, but will likely be less willing to hear about it in the news and on social media.

Concerns about climate change have remained stable over the past two years, but the number who think that climate change will get worse in the next six months has significantly increased. People feel that the situation is getting worse, but their levels of concern aren’t increasing.

While Gen Z are the most concerned about the future of the environment, they’re also more likely than millennials to be tired of hearing about it. They’re a good example of how concern can spill over into climate “doomism”.

Many Americans are feeling overwhelmed right now, leading to a greater sense of fatigue, especially when we’re exposed to constant pressures.

Both brands and news publishers have a part to play in managing people’s feelings toward the environment in 2023. Our research shows that corporations are more trusted than the government. If they’re able to do positive things when politicians can’t, it may help break through that doomerist mindset.

Diving into a digital world

As the real world continues to give cause for concern, Americans are taking advantage of the growing number of options to experiment with their identity online. In 2023, we’ll see this enter a new stage, as increasingly popular virtual worlds like Fortnite and Roblox provide more tools for identity play.

They’re a confident, affluent, and risk-taking group who wants to be the first to try new things.

But it’s for these reasons that attention needs to be paid to how the metaverse is beginning to take shape. These interested American consumers may be the first to take virtual steps in the metaverse, but they don’t represent all those who actually prefer to spend their time online, rather than in the real world.

Consumers in that latter group are more likely to be low-income, be part of the LGBTQ+ community, and have a physical disability. Success in 2023, means ensuring their needs are catered for in virtual spaces.

Customization is going to be key for these consumers. Understanding users’ avatars may reveal a lot about the individual. Each represents a different part of the person’s personality and lifestyle, whether it’s a mood, an interest, a social role, or their beliefs and values. For Americans, it’s one of the main motivations for users to participate in the metaverse.

In fact, 62% of potential metaverse users say using the space to browse or shop for products is of interest to them, with clothing/outfits their priority, ranking above art/collectibles, real estate, and cosmetics.

Ultimately, communities are complicated environments that need some guidance to provide them with identity and purpose. In 2023, the focus needs to be on the safety of these spaces and on creating worlds where all feel welcome, regardless of which version of themselves they choose to present. 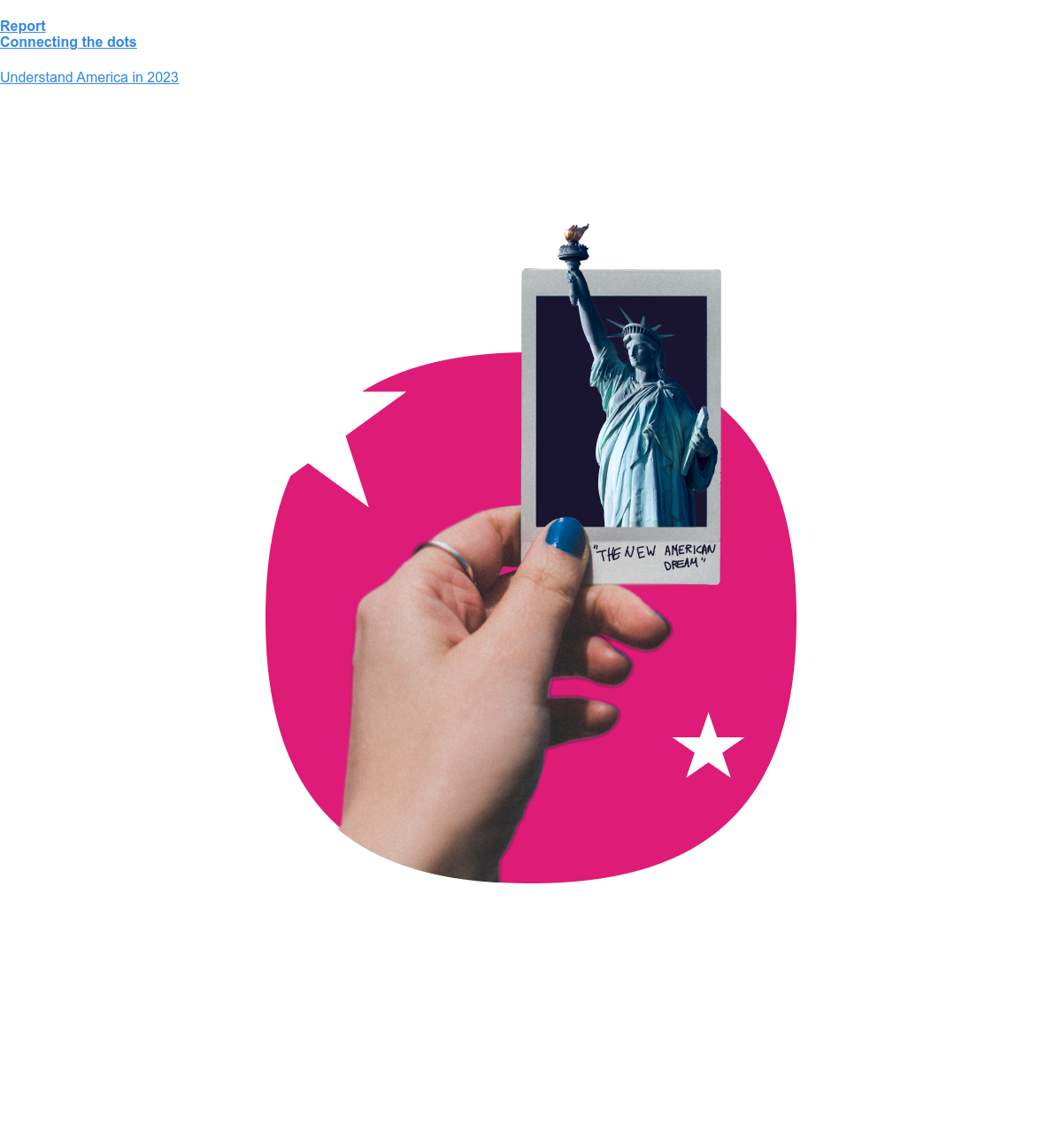 7 Key Factors to Know About the U.S. Travel Industry

4 Key Trends to Watch in the Global Pet Food Market

Around The World In 50 Stats